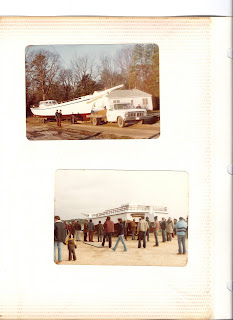 “We had about 3,000 head down here that day.”
Jackie Russell’s face lights up still today, remembering that day in 1979. He’ll draw himself from the peace of sleep, from even the fury of interruption and turn immediately back to that most exhilarating of days nearly half his lifetime ago.

“ ‘National Geographic’ was there, but the fella who’d followed it couldn’t be there that day and the pictures got rejected and that was why we never got in ‘National Geographic’ magazine. “All the politicians were there, big hoop-de-la for Piney Point. And of course after they couldn’t get the boat off everybody went up to Swann’s and got smothered drunk. Except me. I slept on the boat that night.”

A roughly treated, large color photograph of that day is perhaps one of those rejected. I found it at the bottom of one of the drawers of Dee memorabilia in the trailer’s closet-bedroom. I can't find it anymore. It must have been shot during the smothering. Jackie Russell is alone on the stern of his new boat, looking down at her V bottom wedged in the muck of a low tide. Aground. He is centered in the heart of the photo, small aboard his big boat. A cap pulled hard over his head. An arm checkered in a woolen jacket dangling from the rail. He does not see the photographer.

You want to think it is a funny picture, but of course it isn’t. But it isn’t foolish or pitiful either. The most appropriate caption would seem to be, “What is wrong with this picture?”

“It floated off,” Jackie Russell continues. “It was three days later. We got a high tide, a sou’ easter’ and a high tide. It was lightly snowing and the fellow who was married to Anita Evans, I can’t remember his name. Doug. He was at the school and got a wet suit and cut the chains loose and pulled them loose from the fifth wheel and the boat floated off. We got her off December 19th and it was lightly snowing. I think we tried to launch it the 16th and we couldn’t get it off.

The deal was, I think the deal was, the wheels were all in a line.” He sits up in bed, staring into middle space, seeing the scene yet again. “Really why we couldn’t launch that boat, all the wheels were in a line and there was an old boat ramp there at Swann’s and somebody had been digging some manoses out of that boat ramp, that concrete boat ramp. And as those wheels went off the boat ramp one behind another she bogged down right at the end of that ramp. And it might have even been an old piece of concrete at the end of that ramp got caught up.

He falls backs and shuts his eyes. "Enough," he says. "Go on to another chapter."

It was more than 25 years ago I had the first of what sometimes feels a lifetime of ridiculous interviews with Jackie Russell. This night, when he tells again of that day, towel abandoned on the floor, dirty clothes resting on top of clean, it doesn't feel particularly different. Back then I hadn’t any idea what his business was about. I mean his professional business. I did, finally, notice his eyes.

Almost every woman I met those early years, if Jackie Russell dropped into the conversation the next sentence had to do with his eyes. They possessed the cinematic trick that forced a comic book twinkle out of Tony Curtis’ blue eyes in one of the celebrity vehicle movies of the 1960s. The leitmotif gag played for the duration of the movie whenever Tony Curtis’ character’s blue eyes met the camera.


Jackie could do it, can do it, without the cinematic assist, without the gag. “Jackie is genuine,” one of my least demonstrative girlfriends once gushed in a moment of appreciation. I grunted. Somehow I still suspect something of the trick to it. I can see the glint looking as far back as that first interview when he opened his arm wide to introduce his Associates. “My associates,” Jackie Russell welcomed me aboard his skipjack with a majestic sweep of his arm gesturing up the forward deck, just then being swabbed clear of the last of the oyster debris of the day.

A half-dozen men, layered in rag-tag collections of shirts and jackets and rubber boots to their knees, glanced up from their task and acknowledged me with sudden grins, then looked quickly to the captain before returning to their tasks or sauntering off.

“I call them my associates,” Jackie Russell confided to me, walking me aft. “It sounds better that way.” 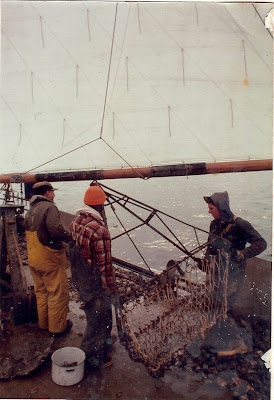 Jack Russell was an egalitarian captain, well, as egalitarian as a captain can become. A huge snort of laughter bursts from him today as he reads over my shoulder.

“I can’t remember the name of the one who worked with Tynan Poe’s son, who, the two of them, beat up Eddie Poe so bad that time,” Jackie laughs. “He told me they were doing all the work and I was making all the money. He laughed.

He welcomed me aboard the skipjack, that first time, with his wide open arm, such a smooth gesture that it goes unnoticed once his eyes get you.
He draws that inclusive arm back, his left arm, and then brings it forward to grasp your forearm in a near embrace, then suddenly blocking that embrace he swings his right hand around and reaches for yours and grabs that handshake to pull you in closer. He holds you face to face, and he’s just a little bit too close but he stays too close, shaking your hand, close and tight. Without quite knowing how, you’re too close for refusal, too off-balance to step back.
Before you know it, you’re aboard, you’re a pirate too, you’re in his world and pleased with yourself. You’re possibly even lost to yourself.
Posted by Viki Volk at 3:51 PM