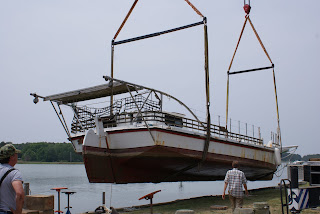 May, 2010
Last week Keene Mill School in Fairfax, Va. saw a skipjack fly. One of their accompanying teachers was Robert Abell, former principal of Piney Point Elementary School and descendant of the Chesapeake watering industry.


The day began threatening with thunderstorms in the forecast. Before the Chesapeake Bay Field Lab teachers arrived a nervous captain paced the parking lot. The students arrived before the cranes.

It would require two cranes -- the smaller engined at the skipjack's bow the other at her stern. The boat's builder, Francis Goddard, arrived before the first crane. Next arrived was Charlie Knott, a man capable of inventing on the spot any necessary mechanical contraption out of the immediately available junk; within his realm he is a veritable Thomas A. Edison.

It is loud and then louder when the second crane appears. Holly Staats and John Fulchiron have joined the workforce in addition to the two crane operators, Mike Eagan and Aaron Mattingly of DirtWorks.

The cranes are in position quickly but it takes more than an hour for the men to satisfy themselves about which ropes and straps and hoists to use. They adjust, readjust, consider, reconsider, reconfigure.

Aubrey Mattingly was the only crane operator Francis Goddard permitted work on the Dee when her mast needed repair in 2001. With an ancient crane nicknamed Big Red Aubrey removed and then re-stepped the mast nearly a decade ago. His son Aaron inherited the touch and just as smoothly removed it again last month, April 23, 2010, preparing for this day -- May 12, 2010 -- when the skipjack would be lifted out of the water for restoration. 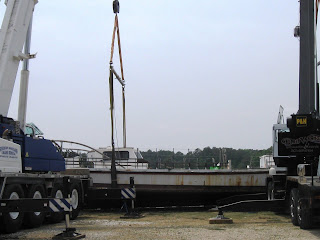 All appears ready. The cranes are revved, their arms extended and their back wheels off the ground allowing the legs to compensate the weight. Aaron yells above the noise into his cell phone, "I don't want to be the one breaks it in two."

As the straps tighten and the men jump off the boat and the hull is no longer floating but cradled, a loud creaking begins, louder than the cranes.
It was the straps, I am later told.
"I thought it was the wood," I said. Francis overheard and whipped his head around. He scolded in a single sputtering sound, walked on without pause, behind him he raised then dropped his long expressive arm in disdainful dismissal of such an impossible consideration.

Later I bring Francis a ladder. Of course the nervous captain wouldn't have thought to have one handy, I told Francis.
"You leave off him," Francis scolded me again. "Jackie Russell's doing fine. Just fine."
Posted by Viki Volk at 10:30 AM