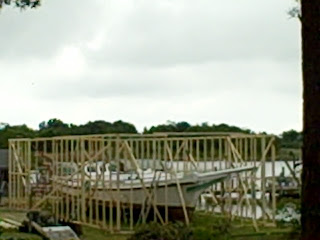 Carpenter Matt McFann made the decision simple. The reason to build a shed around the skipjack was "so this old boat doesn't turn to trash."

"She's drying out already," shipwright Benjamin Goddard said as he plucked chunks of loose paint from the stern where reconstruction is likely to occur. He talked about the boat and praised efforts (by the Maryland Heritage Areas Authority and the Chesapeake Bay Field Lab) to preserve the Dee as he walked beneath the growing canopy of plastic sheeting and pine framing. 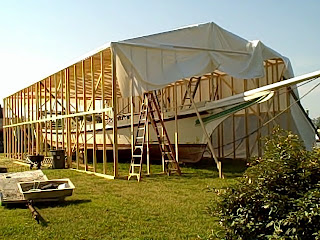 "I didn't know boards came that long," said Carol Cullison, St. George Islander and still married to a member of the Dee's first working crew. The Dee of St. Mary's oystered with the last commercial sailing fleet in North America from 1979 to 1989.

The shed of pine and plastic -- which comes in a long roll and is draped and industrial-stapled to the frame -- is needed to shelter the skipjack from the sun and make work at her home port possible.

Maryland Heritage Areas Authority applauded Chesapeake Bay Field Lab's successful effort to keep the skipjack at her home port for her restoration. Already classes from Virginia and Maryland have seen the vessel closer than any of the prior 100,000 students estimated to have sailed the Dee during her 20 years of environmental education.

Both the nonprofit that owns th Dee and the many preservations helping to support the restoration, hope such immediate access to the year's effort will spur fund raising.

"It ain't that bad," said Ben Goddard as he peeled the paint and walked around her stern. Indeed, he concluded, a wooden boat that has put in 30 hard working years is due an overhaul. That she remains stout and secure to the shipwrights is testimony to a masterwork of ship building.
Posted by Viki Volk at 9:00 AM