All in all things aren't floating too well around this place, 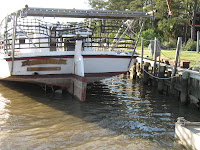 at this time. The winds have blown all the water out of the creek and the de-masted skipjack lists in the mud.

A group of Merchant Marines in-training at the Harry Lundeberg School of Seamanship in Piney Point came down a week and a half ago on a high tide and helped Jack nudge the skipjack into the bulkhead. 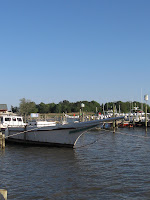 This is so the cranes can reach it and swing it onto shore.

The cranes are due today. They say.

For a week Jack has hunted down huge wooden 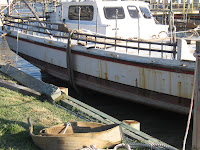 blocks and more importantly lifting straps that can nestle the boat as the cranes lift it from the water. There will be two cranes. The boat might be as heavy as 30 tons, Jack says. 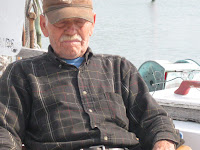 Francis shakes his head and shrugs his shoulders. "Twenty-two?" he says.

Other men help locate the blocks and jacks. Danny Holden leaves a half-dozen nice solid blocks at the dock as his contribution. 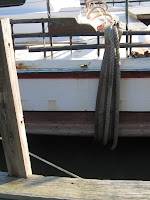 Jack finds heavy rope and threads it through the sleeves in the straps he borrowed from St. Mary's Yachting Center, Brandywine Motors and one from David Adams. The rope he finds in the infinite stores of the endless rigging snugged somewhere within the dark and cavernous attic above the oyster house. 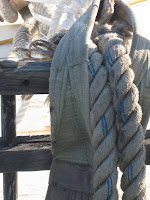 And on another high tide he slips the straps beneath the bottom of the skipjack the Dee of St. Mary's and pulls the ropes onto her deck.

There is a late call Monday night and a date given for the cranes to arrive. The date is set and rain dates aren't an option. There is a flurry of paperwork. The wind blows harder, the skipjack is immobile in the mud. Our daughter who is teaching the Wooden Boat station at the Chesapeake Bay Field Lab this semester reported to me last week, "The skipjack is on the ground."

When Jack and I agreed to create a nonprofit to continue the life of the Dee of St. Mary's beyond our own we spoke with our daughters --- Hoot and Holler -- about their loss of inheritance, that the boat would not pass to them.

"Whoo - hoo," they both cried and pumped their arms in the air. Despite their hooting and hollering and the one who dramatically flung an arm to her forehead at the tragedy of such a loss, they made it clear that neither were considering the life of a waterman.

Yet the day she reported, "The skipjack is on the ground," she didn't think to mention until later that a tool at her teaching station needed to be replaced. She shrugged that she could use something else in the meantime.

"It's on the ground," she repeated.

So Jack stalks the waterfront, snaps at the wife, has no chance to kick a dog because none cross his path, instinctively smart enough to stay out of his way as he waits for the cranes to arrive. 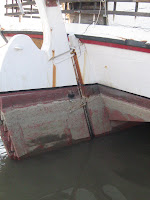 "Well if they drop it, it drops," he says during his 90 seconds sitting at the kitchen table this morning. He leaves his coffee to chill and curdle.

Right, I think. And the boat is on the ground. Nobody's worried at all.
Posted by Viki Volk at 11:00 AM