Travis Mattingly, overseen by his father Aubrey Mattingly, pulled the mast the first time. Aubrey's son Aaron Mattingly operated the crane to pull the mast this year with the assistance of Joe Hockinson.
Francis Goddard, who built the Dee of St. Mary's skipjack in 1979, advised on both projects down to specific inches and pounds on the 76-foot mast and (estimated) 22-ton vessel he built. For example, Francis determined where the strap would be secured on the mast for a safe pull, swing and placement.
Jackie Russell, former owner and still Captain of the Dee -- now owned by the nonprofit, Chesapeake Bay Field Lab, Inc. -- performed on-site supervision and labor.
Eugene "Bones" Ramsey, former first mate of the Dee during her oystering years, went aloft to fasten the strap.
The entire process from the arrival of the crane to its departure took less than 2 hours.

When the Dee was built in 1979 her launch came before her mast was stepped. The photos below were taken before and after. 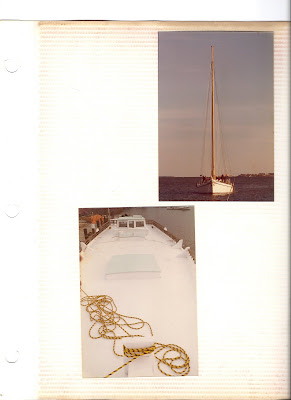 The mast is a single tree. A pine tree Francis, Jackie and George Bean floated across the Potomac from Virginia once Francis found the tree he wanted. George pulled the tree is his boat the Cathy Lynn -- also built by Francis. The tree would dive deep into the river, Jackie Russell recalls and the men would lose sight of it and not know when or where it would rocket out of the water. Or when it would dive again.
Posted by Viki Volk at 12:01 PM